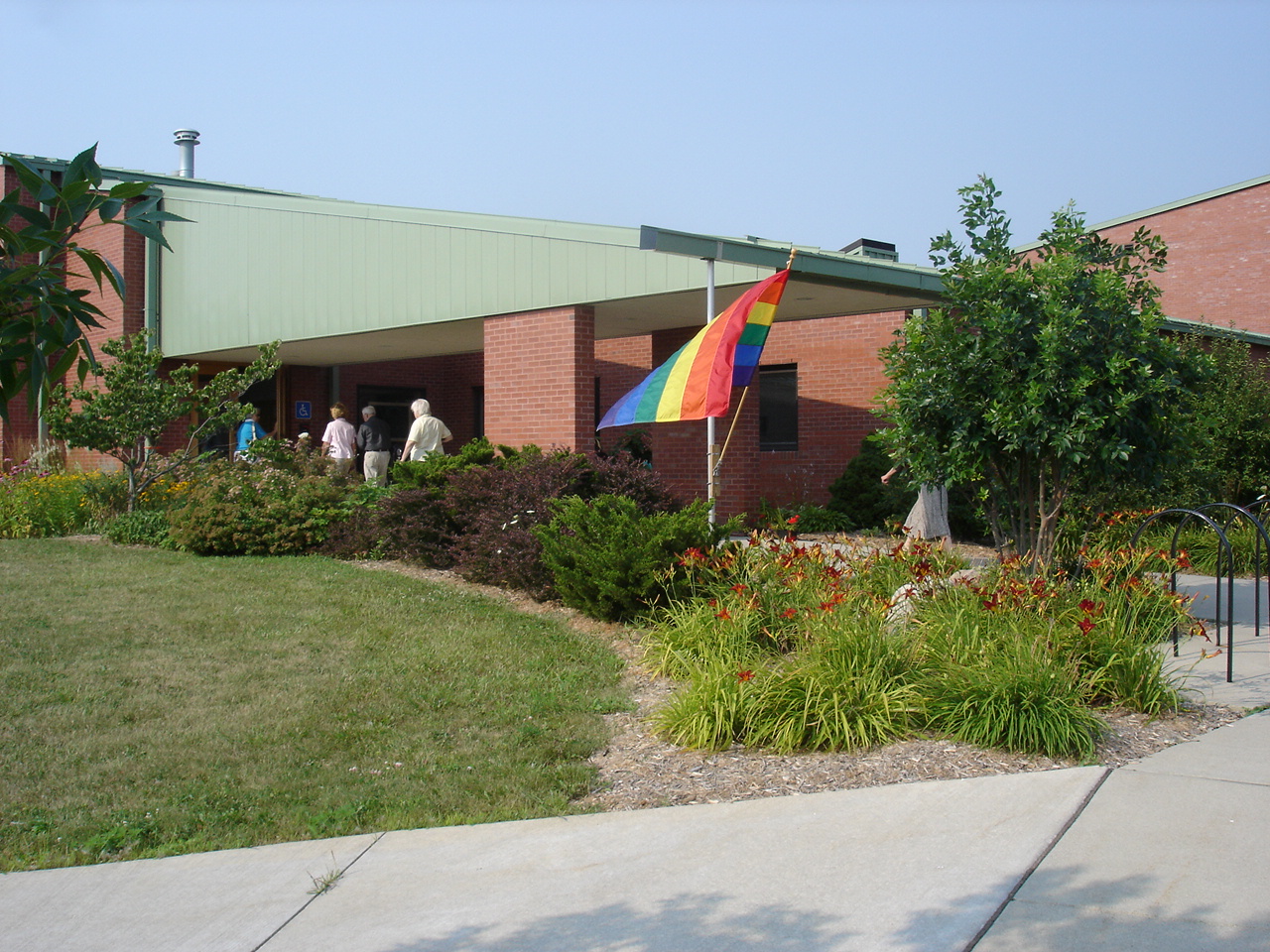 Governance of UUAA is overseen by a 9 member elected Board of Trustees (Board). The Board has two primary responsibilities: 1- Vision: prioritizing and communicating the vision created by the Congregation and 2- Oversight: monitoring the financial health and the overall operations of UUAA. The Board delegates responsibility for implementing vision and healthy operational practices to the Senior Minister.

Laura’s background in social justice work and activism is a good match with UUAA, especially our covenant that reminds us  “the spirit of this church is love and service is its law.”  She is retired from a long career in organizational communications, public relations, and as an International Rep for the largest union in the United States. During her time with UUAA, she’s been active with the Auction, Friday Fundays (pivoted now to Sunday Funday), Chalice Circles and Chalice Circles Curriculum, the Vision 20/50 Steering Committee, the Unity Group,  and Newcomer’s Welcome. Laura served as Vice President of the Board of Trustees before being elected to serve a two-year term as President in 2021.

Gregg has participated widely in the life of UUAA since moving to Ann Arbor with his wife, Lissa, and daughter, Emily, over 13 years ago. They left dear friends and family in Chicago, including their UU friends at Second Unitarian Church, the congregation where they first discovered this amazing faith tradition 18 years ago.

Since joining UUAA, Gregg and family have been nourished by all that this congregation has to offer—warm friendships, inspiring services, an amazing community of musicians, small-group ministries (including the 7th men’s circle), many opportunities for spiritual growth and development, and the chance to serve this congregation. In his time at UUAA, Gregg has been an SGD teacher, a member of the SGD Council, a coming-of-age mentor, a planner and leader in the activities of the men’s fellowship, including two years as Chair of the Men’s Council, a member of  the LOV (Living Our Values) team, a member of the bass section in the Chalice Singers choir, and most recently, Vice President of the Board of Trustees.

In his professional life, Gregg is an Associate Director in the Survey Research Operations unit at Michigan’s Institute for Social Research. When he’s not working or spending time at UUAA, Gregg loves to make photographs and hand-crafted books, and has recently begun writing and telling his own stories.

S. Kerene Moore and her partner Kim have been members of UUAA for about five years, and are excited to have found a church community for their family including three children.  Kerene was raised in Detroit and attended the University of Michigan for undergraduate and law school where she was honored as one of the first Dean’s Public Service Fellows. Ms. Moore has worked her entire career to guarantee that all persons — particularly the most vulnerable — have fair and equal access to the justice system. Ms. Moore represented over 1,000 low-income community members at the Michigan Advocacy Program, fought discrimination at the Michigan Department of Civil Rights, and founded OUTreach, an award-winning pro bono legal advocacy project with Michigan Law’s Outlaws that offers legal support on LGBT-related legal issues. She currently serves as a Judicial Attorney in the 22nd Circuit Court and has served on the boards of the Ann Arbor District Library, Jim Toy Community Center, Equality Michigan, State Bar of Michigan LGBTQA Law Section, and the Ann Arbor Human Rights Commission. Kerene lives in Ann Arbor with her partner and three children.

Joe has been a member of UUAA since 2019. His first service to UUAA was joyfully joining the choir. He signed the Membership Book in March of that year and began serving on the Jackson Social Welfare Fund Committee. The following year he was honored to be asked to serve on Rev. theresa’s Committee on Ministry. He has worked on putting together a lay-led Trans and Non-Binary voices service.

He is passionate about helping us move into the future digitally and socially. As a professional Tech Support person, he is very comfortable with Google Docs and Zoom.

Jeff has been an active member of the UUAA community since moving to Ann Arbor in 1996. Shortly after joining, he participated in the 20s/30s group and has maintained many friendships from that group. He helped form the 2nd Men’s Circle which continues to meet regularly. H also served on the Green Sanctuary committee from 2000-2004 and was a co-chair that helped play a pivotal role in obtaining the Green Sanctuary certification from the UUA.

Jeff has also been very involved in the religious education program, having taught almost every RE/SGD level class from preschool to his current role as a YRUU advisor. He served on the committee previously known as the RE Advisory Committee. Jeff has been on the Nominating Committee (now Leadership Development Team), the Auction committee, helped plan Men’s Retreats and Men’s Dinners, and served a term on the Men’s Council.

Outside of the congregation, Jeff is an engineer, currently working for a manufacturer of medical devices based in Kalamazoo. He enjoys cycling, cross-country skiing, reading, cooking, and playing board games and euchre. His fiancée, Helena, is new to UUAA. Jeff and Helena are getting married in summer, 2022, and look forward to traveling again beginning with a trip to Croatia.

Henrike and her husband moved from the Netherlands to the US to study and work at the University of Michigan. They discovered Unitarian Universalism after a few years here and signed the membership book in 2007, when their oldest daughter was in preschool (and the other children weren’t yet born). Over the years, Henrike taught Spiritual Growth & Development classes from Kindergarten to 6th grade, and served on the SGD committee. The Vision 20/50 process made her realize the many ways in which the congregation – and its covenantal approach to bringing about the beloved community – had become a core part of her life, helping her to align more closely what she thinks, says, and does. She feels that serving on the Board allows her to do her “little bit of good” where she currently is.

A later-life UU, Glenn joined UUAA in 2015, became more involved through the COA program, the 12th men’s circle, men’s council, as a Vision 20/50 ambassador, from 2020 as a trustee and 2021 as a member of the LDT. His career as an English instructor includes the last 20 years as a professor at Mott Community College in Flint. Other hours may find him exercising, cooking, or watching basketball. He and Michele have been married for 10 years, have three children, two grandchildren, and share their Ann Arbor household with two golden retrievers and one cat.

David is from NY, but has been living in Ann Arbor for 30 years. He and his family have been members of UUAA since 2004 and his children grew up in the Spiritual Growth & Development program. In addition to being on the Board, David serves on the Social Justice Council, has been a Coming of Age mentor, volunteered at Alpha House, and volunteered on the newcomer’s welcome committee. In his professional life, David is a Professor at the University of Michigan, directing several programs in regenerative medicine. He also loves to go 4-5 miles a day with his energetic golden retriever.

Kathy McLean and her family became UUs in the late 1970’s in Omaha, NE.  After moving often because of Jon’s Air Force career, they retired to the UP near Marquette. They moved to Ann Arbor in 2008 and immediately joined UUAA.

Coming from a very small congregation to this large one was a bit of a culture shock. Kathy found Chalice Circles a good way to connect with a small group and get to know them more deeply. After this rewarding experience, she became a co-facilitator for a number of years, eventually serving on the Chalice Circle steering committee and curriculum writing team. Kathy and Jon also attended Interweave (our previous LGBTQIA group) meetings, making many good friends there.

After hearing an inspirational sermon by previous Director of Worship & Music, Dr. Glen Thomas Rideout, Kathy joined the Challenging Racism Group (co-chairing it for several years), then worked on the transition to our current Racial Justice Arc. As part of her dedication to racial justice, Kathy also went on one of the trips to the Mexican border with Rev. Manish and other UUAA members. After returning, she became involved in our Immigration Action Coalition.

Kathy’s other interests include connecting to our wider Unitarian Universalist movement. She had been to two General Assemblies before coming to UUAA, so she became part of the UUAA Denominational Connections Team and has attended multiple GAs as a delegate representing this community.

Learn about the roles and responsibilities of the board positions.

You Can Virtually Attend a Board Meeting…

Board meetings are always open to observers. You will remain muted during the meeting.

Use this link to REGISTER to observe a Board meeting over Zoom.

To attend and also address the Board on a governance topic, you can send a request to the UUAA President at least 1 week in advance of the meeting. Please provide the topic you wish to speak about. You will have up to 5 minutes to address the Board. The Board will usually not respond to the issue you present at the meeting, but will listen and give the issue consideration at a future meeting.

View minutes from past board meetings…